The workbook asked me to read Matt 20:1-15 and then to define grace. I didn’t want to give a canned answer, so I prayed, read the passage a few times and then started a story. Stories help me think. I didn’t know where it was going and the last sentence took me by surprise. But it was helpful to see grace in a new light. Here’s the story: 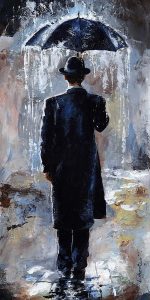 A wealthy businessman in a suit, carrying a large umbrella, notices a drunk shivering in the cold rain. He stops, bends down, and the drunk looks up, frowns and swears in a rage at the man. A tear forms in the wealthy man’s eye. He leaves, but returns in 20 minutes. He sits with the drunk, but says nothing. The drunk snarls epithets. The man pulls a coat out of a bag, and lays it across the drunk’s shoulders. He pulls out a cup of coffee for himself and shares another cup with the drunk. The drunk is his son.
Grace, seen this way, is not unmerited. It’s merit arises in the giver, not the receiver.
God says he chose Israel because they were the least of all peoples. Paul reminded the proud Corinthians that among them there were not many noble or mighty or wise who were called. Jesus came to heal those who were sick, blessing those who were poor in spirit, and seeking those laboring under a heavy burden. Jesus said God was more impressed by the publican who could barely cry out and beg forgiveness than the successful and righteous Pharisee. We know what the Psalms say about God’s sympathy for a broken and contrite heart.
So I am going to say that besides being “unmerited favor” in regards to the recipient, grace is also merited favor that arises from the heart of the giver. It may be demonstrated in our experience by trembling at His word, but it began before time, arising in His heart, before ever we acted/reacted. Maybe this considers grace from God’s perspective rather than the usual way of defining grace from our perspective. It certainly helped me get a deeper, more personal impression of God reaching down to a sinner such as I am.
. . .
God: I love you.
me: Why?
God: Because.
Me: Because why?
(He smiles)
God: Just because.
. . .
Did you ever hear people say, “because” isn’t an answer? It is.
“The Lord did not set his love upon you, nor choose you, because ye were more in number than any people; for ye were the fewest of all people. But BECAUSE the Lord loved you…” Deut 7:7,8 (It’s kind of an “I am that I am” sort of thing. “I love you, that I love you.”) It is altogether about God, start to finish.