Maybe it isn’t that evil is winning. 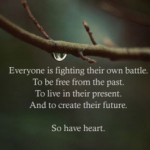 Maybe as God begins to shine His light, the shades of gray recede, and we are simply seeing more clearly the gap between good and evil. Soon there will be nowhere to hide.

The poor, the blind, the bruised, the captives, the brokenhearted

We walk past people everyday who are struggling and hurting. Jesus described His ministry as, “he hath anointed me to preach the gospel to the poor; he hath sent me to heal the brokenhearted, to preach deliverance to the captives, and recovering of sight to the blind, to set at liberty them that are bruised, To preach the acceptable year of the Lord.” So what do you think He meant when He said, “behold, I say unto you, Lift up your eyes, and look on the fields; for they are white already to harvest.” 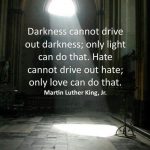 We had (and have) an opportunity to show the world what Christ is like, especially as promised troubles in the world come to bear against us (see John 16:33). Gay marriage. Abortion. Police brutality. Sexual perversion. Pushing God out of the public square. It was not standard American church variety faith that Paul mentions in Romans: “First, I thank my God through Jesus Christ for you all, that your faith is spoken of throughout the whole world.” In what ways is our faith visible and noted far and wide? How could our response to sin and evil—and how we treat each other as family—become more godly?

Unregenerate Paul’s approach to dealing with people who held different beliefs that he considered evil: force of law.

This is the same approach both liberals and conservatives use. This is not the approach of Christians. Don’t get sucked into politics and government as the answer. The Gospel is the only answer; there is no such thing as a “Christian nation.” The world is the mission field of the church (that is, of the saints, of you and me).

And Saul, yet breathing out threatenings and slaughter against the disciples of the Lord, went unto the high priest, And desired of him letters to Damascus to the synagogues, that if he found any of this way, whether they were men or women, he might bring them bound unto Jerusalem… Then Ananias answered, Lord, I have heard by many of this man, how much evil he hath done to thy saints at Jerusalem: And here he hath authority from the chief priests to bind all that call on thy name. Acts 9:1-2, 13-14

Paul’s approach to unbelievers after he met Jesus was very different:

Therefore if thine enemy hunger, feed him; if he thirst, give him drink… Be not overcome of evil, but overcome evil with good. Rom 12:20-21

The servant of the Lord must not strive; but be gentle unto all men, apt to teach, patient, in meekness instructing those that oppose themselves; if God peradventure will give them repentance to the acknowledging of the truth; and that they may recover themselves out of the snare of the devil, who are taken captive by him at his will. II Tim 2:24-26

Ye know, from the first day that I came into Asia, after what manner I have been with you at all seasons, serving the Lord with all humility of mind, and with many tears, and temptations, which befell me by the lying in wait of the Jews: and how I kept back nothing that was profitable unto you, but have shewed you, and have taught you publicly, and from house to house, testifying both to the Jews, and also to the Greeks, repentance toward God, and faith toward our Lord Jesus Christ. Acts 20:18-21